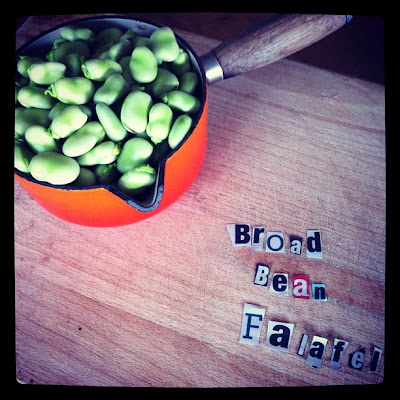 In-spite of the weather the broad beans have done reasonably well. The rain has meant they haven't been ravaged by hordes of black fly this summer, although they have taken some time to grow.
I picked a pan full of them and wanted to use them, food network UK is showing Eat Street and Street Feasts which gave me the idea of making falafel with them.

I first ate falafel in Bangkok, my travel companion at the time, a Californian, was quite surprised I had never even heard of it before, this was before they really took off in the UK. After trying them there, from a street vendor, I was hooked. I tried many packet mixes but they always let me down, too doughy or floury. This is the first time I have made them from scratch and they are well worth it.


For the mix, I had about 3/4lb of broad beans, podded but still in their shells. I blanched them for 3 minutes to soften them up, and make them easier to shell. 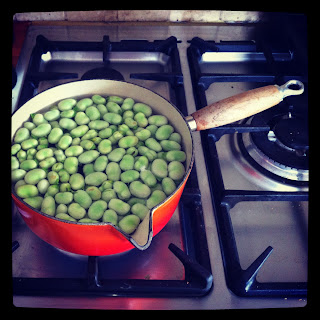 I'm assured that it's the shell around the inner cotyledons that caused the bitter flavour so that needed to come off, after I had shocked the blanched beans in some cold water. 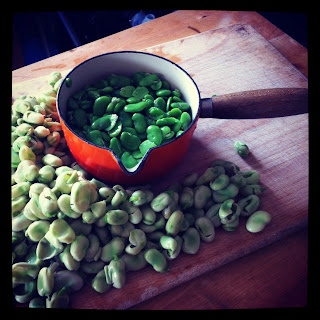 This took some time, but it really is worth it. Just look at the insipid nature of the discarded shells and the lush green of the bean proper that they concealed.

Using a potato masher I mashed the beans in a bowl until they were broken down into a coarse pulp. I didn't was a fine mash, lumps add character in my opinion. Into a mini food processor I poured some pumpkin seeds, sunflower seeds and hemp seeds. A good shake of each, I'm not sure of the measure but nothing too excessive really. These were blitzed until they were finely chopped, not powdered. I added these to the beans and then in the same chopper I put a clove and a half of garlic, a tsp of cumin, ground coriander and herbs du provence. These were blitzed until the garlic was chopped and mixed with the herbs and spices. This was added to the main bowl and mixed in along with 1tsp of salt and 1 tsp of pepper. 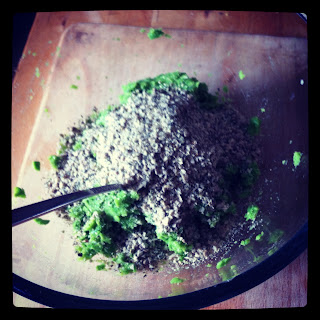 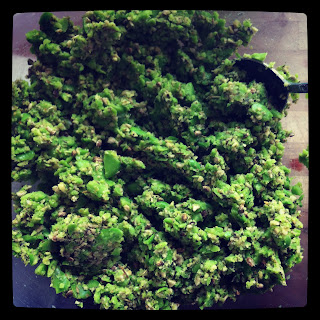 Using olive oil I greased my hands and started to mould small walnut sized rounds of the mixture. 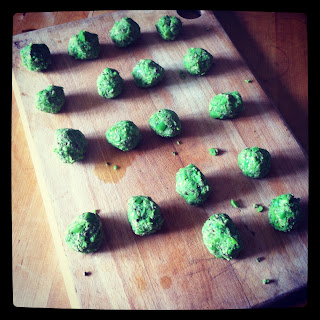 In a large pan I heated up about 1" depth of sunflower oil. I am not a fan of deep frying so I opted to shallow fry. When the oil was up to temperature (tested by dropping a little loose falafel mix into it and watching it sizzle and bubble) I fried the balls 5 at a time, turning after 1 minute or so. It's important that not too many are done at once as this can lower the temperature of the oil and also make turning them over tricky. 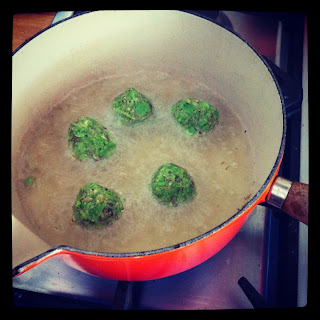 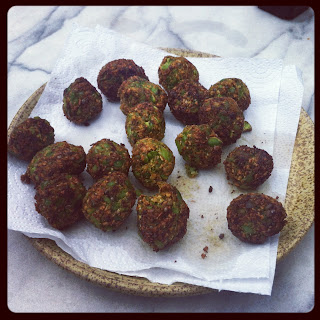 After they were an even golden brown all over, with some green still showing from the beans underneath, I removed them from the oil using a slotted spoon and put them onto kitchen paper to drain off the excess oil.

Now for the flat bread

Mix 2 cups of bread flour 3/4 cup of water, 1/2 tsp salt and 1tbsp olive oil. Mix all of this together and knead for about 10 minutes until the gluten has developed and given it a bit of elasticity. I didn't have a standard cup measure so I followed my own rule of just use the same cup to measure everything and you'll be okay... It seems to work. 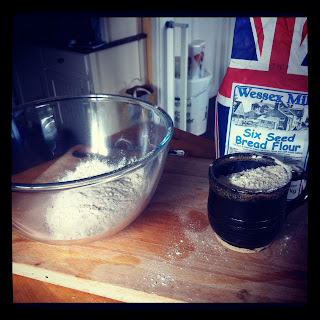 Divide into 12 balls. I do this by rolling sausages of the dough and cutting it in to halves and thirds until I have 12 balls all roughly the same.
Roll them out with a rolling pin, turning a little after each roll so they end up round in shape. 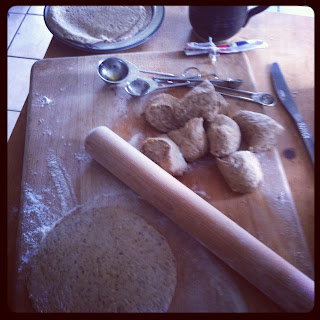 Heat up a frying pan, but don't put oil into it, dry fry the bread 1min on each side. Don't let them burn, but brown spots on them is usual. When done keep on a plate covered with a damp, clean tea towel.

Load up the flat bread with salad, mayo and falafel, serve in pairs like a soft taco and enjoy! 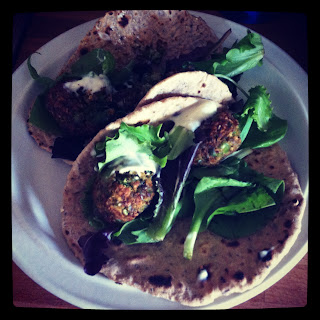